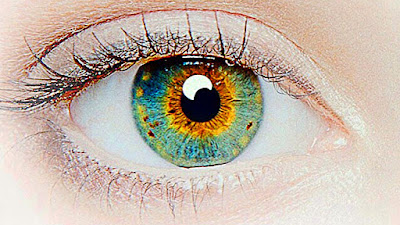 This is the fourth Brit Marling film I have reviewed on this site and like the others (Sound of my Voice, Another Earth, The East) it is clever, has a good story, draws you into the plot and leaves unanswered questions for you to ponder at the end. I like Brit Marling's acting and the films she makes. Find out more about her work here and here.

This film explores the contrast between life which bases reason solely on scientific processes and life which is open to the spiritual dimensions of our existence. The battleground on which this is fought out is the lab of Dr Ian Gray (Michael Pitt) who is trying to chart the evolution of the eye in a bid to 'disprove' the validity of the concept of intelligent design. In the mind of Gray, science and faith are mutually exclusive.

Gray's fascination with the unique character of the iris of the eye began at an early age and he has built up a large collection of photographs of eyes. His research is in the field of biometrics and branches out into tracing the evolution of the eye through different species who increasingly required the agency of sight to function within their natural habitat. Human eyes being at the pinnacle of the scientific process of the evolution but also being seen by some as the gateway to the soul or embodying the blueprint of a Creator.

Gray's life is impacted by two women - a first year lab assistant Karen (Brit Marling), sent to him on rotation and a woman called Sofi (Astrid Bergès-Frisbey) with incredible eyes (see above) who grabs his attention at a halloween party and then begins to seduce him before running away. Gray is infatuated with Sofi and whilst Karen is left to develop the research in the lab, Gray takes off on a stalking odyssey to hunt down Sofi guided by random occurrences of the number 11. Science and seemingly irrational coincidences from a world beyond what we see conspire to give the narrative its spine.

The fact verses faith debate is played out well between the main characters although once or twice it all gets a little bit formulaic. Spirituality is presented as a pastiche of faiths with reincarnation and karma being prominent motifs. This may be an intentional nod towards the generality of faith and the variety of ways in which different cultures and faiths express their beliefs, or simply a function of Sofi's nomadic and eclectic upbringing.

Whilst telling you what the film is about I have not told you how it explores these themes which is original and delivers a worthy film. It's not without it's shortcomings and I felt that the characters could have undergone fuller development. It lacks the impact of Another Earth which was also written and directed by Mike Hill but he still delivers a film that can be either watched and enjoyed at face level or used as a springboard for deeper reflection on important metaphysical themes. I liked it and will award it 8/10 even if its ambition isn't quite matched by its delivery. I'm looking forward to the next offering from Brit Marling.

Posted by Duncan Strathie at 08:16