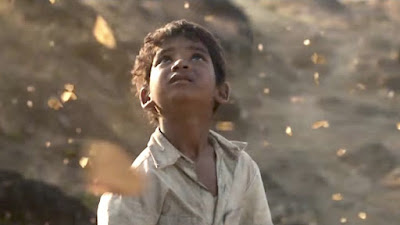 This is a wonderful and uplifting film based on a true story. It is a film of great generosity. The trailers and advertising make the plot clear - there are no surprises but this film's worth is in the journey not only of the central character but also the viewer's journey as you get sucked in - totally. I don't know when a film last made me cry so much!

Five year-old Saroo and his older brother Guddu find work as they can - mostly along the railway. One day whilst waiting for Guddu to return a tired Saroo wanders onto and empty train and wakes up the next day as it speeds ever Eastward ending up 2 days later in Calcutta more than 1500 miles away. Not knowing the language, he has to live on the streets by his wits and is eventually taken to an orphanage from where he is adopted by a couple in Tasmania and brought up as their son.

As a fully integrated Aussie, Saroo heads off to College in Melbourne but begins to be plagued by flash-backs to his early childhood. He becomes obsessed with finding his home but keeps his research secret from his adoptive parents wishing to spare their feelings. He spends hours piecing together the flashbacks and constructs a virtual world inside his head where he knows every alleyway and junction. He recreates home internally. The obsession begins to affect Saroo's relationships and he drops out of studies and work. Eventually he works out where he is from and is reunited with his mother. I will give nothing more away about the plot - there is still plenty more to see.

Some have argued that because the narrative arc is so simple, why does it require a film of 2 hours duration to tell the story. The answer is because this film does so much more than just tell a story. The cast is top-drawer - Dev Patel plays the 25 year old Saroo, Rooney Mara his girlfriend and his adoptive mother is played by Nicole Kidman whose beauty, vulnerability and compassion are simply enchanting. The film is also beautifully shot - the opening aerial sequences of India and Tasmania highlight the contrast between the two. The way the warmth or coldness of the light is used to reinforce the mood of a scene is also masterful and belies the fact that this was Director Garth Davis' first feature film.

This film is about the need to connect with home - our origins, the place and people that formed and shaped us. It also explores, loss, love, hope and familial responsibility. All good themes that contribute to the uplifting nature of this film. Even as his obsession drives him to dark places, Saroo is never beyond the forgiveness and love of those around him.

The train is more than a metaphor for the journey Saroo undertakes. As well as the physical journey from Ganesh Talai to Hobart and back again, this film takes the viewer on an emotional journey where we befriend and want only the best for Saroo. The scenery is varied as is the pace of the film. Windows and reflections in glass feature regularly as Saroo tries to reflect on who he is and where he has come from. Occasionally we are given a precious insight into the psychological state of Seroo and those around him.

There is little if anything to dislike in this film. If the pace or length of the film had been altered in any way, it would only have been to make the film poorer than it is. The contrast between eking out a subsistence living in India and enjoying the world of plenty and privilege in Australia cannot be over-stated but Saroo's cheerful happiness with either circumstance discloses that a lesser person would probably have succumbed to some nefarious activity along the way and have ended up dead or addicted to something.

Where do you come from and what has contributed to making you the person you are today? Fundamental questions that we need to explore if we are to have any chance of being at peace with ourself. When dislocation accidentally occurs, or someone's upbringing was highly transient (as was my experience) notions of home and the identity that flows from it can be missing and our sense of self eroded as a consequence. heavy stuff.

As you will have gathered, I really liked this film - in spite of the emotional work out it gave me. I will seek to add the disc to my library as soon as I can. In the meantime I will award it the rare accolade of 9/10. This film is a gift - receive it with enthusiasm.

Posted by Duncan Strathie at 15:21