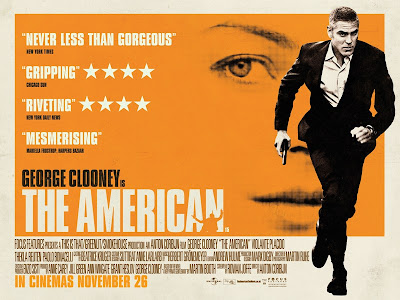 Clooney's latest introspective angstfest is a poor film - it could have been so much more. It is cool, but beyond that it is confused. Is it an action film? Not enough action. Is it a love film? Maybe, but the ending will leave you unfulfilled. Is it a film that explores ghosts from the past and the pricking of conscience? No, the intervention of the priest is too heavy and direct for that.

What is certain is that the backdrop could be from a travelogue - the snowy expanses of Sweden, the bustle of Rome, the remote and tranquil beauty of the hillside village in Abruzzo. The visual quality of the cinematography is at times stunning. As an Assassin and gun maker on the run, Clooney's character wants out, but his handler has one last job for him. This time all he has to do is make a gun for another assassin - Mathilda. You might think that someone trying to lay low would not go as an American outsider to a small rural village where they would undoubtedly attract attention. Furthermore, you would not expect someone craving anonymity to strike up a friendship with the village priest and a romance with one of the village prostitutes - both people who circulate widely within the local population. It is of little surprise that his past catches up with him and in the cobbled streets of Castel del Monte chases ensue where assassin's bulletts are exchanged and innocent bystanders killed - none of which seems to attract the attention of the police or turn the locals against The American.

The film leaves a lot unsaid - too much in my mind. At other times it is in your face as the priest confronts The American about his sins and offers confession - but it is the priest who ends up confessing to the assassin. At best the plot and dialogue are clunky. There is no back story and everything that happens in the film that clearly has a reference to things outside the village is left to hang in mid air. The ending is similarly inconclusive.

The Clooney character is clearly going through a mid-life crisis. However, it appears not to be one of regret for what he has done. If there is any regret, it is over how hard it is to retire gracefully from the world of the global assassin club. He knows too much. He has seen too much. He knows too many contacts. He no longer serves a useful purpose for those who would hire him and has become a liability. Therefore, like those whom he used to hunt down and kill, the hunter now becomes the hunted. The plot is clichéd and unremarkable. It's like a low-budget Bourne film in that respect!

This is the extent of the moral insight offered by the film. It fails as an action movie. It is unsatisfactory as spy movie. Its conclusion spoils it as love story. It appears that this film is useful as a vehicle for the muscular Clooney and beautiful Abruzzo.

If it's a rainy afternoon and you've nothing better to do, go and see it - if only for the beauty of Castel del Monte. I'll give it 6/10.
Posted by Duncan Strathie at 10:17