I was reading this month's Empire and was intrigued to find a piece from 13 year-old Chloe Moretz who played Hit-Girl/Mindy Macready in Kick-Ass. When I reviewed the film, I was critical of the level of violence her character perpetrated - it made me feel uneasy and I still don't want to see the film a second time because of it. 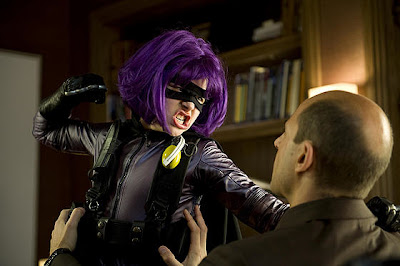 In the piece in Empire (January 2011 page 125) Ms Moretz says what an awesome year it has been for her and how she loves making movies - and that 'it's always going to be that way'. It's good that youngsters have aspirations and are able to fulfil dreams, but to me it reveals the same naivety with which a 13 year-old is cast as a vengeful and violent super hero (or should that be heroine?). For me this is further underlined by her remark in the piece "It's a film - it's fun. You're not supposed to go in wondering what its moral standards are." If film-makers and actors have no moral responsibility for their creative product, who does? Precisely where does Ms Moretz draw the line?

It is understandable that one so young can so easily get caught up in the whole Hollywood thing. She claims that her family help her keep her feet on the ground and that she is a 'normal 13 year-old girl'. She also quotes a congratulatory tweet from Kylie Minogue and says "After Kick-Ass, adult actors really respect me for being an actor, not just a kid actor".

I am in no way casting doubts about her acting abilities - although her role in Kick-Ass was not a stern test of these. What I do want to question is her lack of seeing where moral responsibility lies.
Posted by Duncan Strathie at 11:40