The Girl Who Kicked the Hornets' Nest 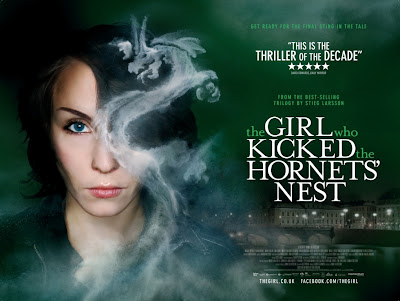 The third instalment from Steig Larson's Milennium Trilogy. I found this to be a very good film and a fitting climax to the trilogy. Tension and action are well balanced and paced throughout. Having set the context in the first film and given the back-story in the second, this one nicely brings it together. You know what the hoped for outcome is, but will they be able to achieve it?

The plot is complex with at least three arms of Government and private security involved. There is also Lisbeth's half-brother Niedermann running around trying to kill her, not to mention a gang of bikers and a bent and abusive Psychiatrist caught up in the whole saga. Characters who have previously only been peripheral come much more to the fore and the Milennium quartet find their relationship pushed to the limit. The pivot around which all this revolves is Blomkvist - who's pursuit of truth in the face of a cover-up started the whole saga off. It is fitting then, that the trilogy concludes with the Swedish authorities on trial as well as Lisbeth Salander and it isn't right until the end that you find out which way the scales of justice will tip.

This trilogy has launched Noomi Rapace onto the world stage - and deservedly so. She delivers a consistently intense characterisation of the abused and damaged Salander who struggles to express her humanity and who seeks a sense of self that has integrity within a system that has abused and violated her for most of her life. Rapace manages to span the spectrum by delivering a performance that is filled with brutal power one moment and child-like vulnerability the next. Her method-acting style will have seared Lisbeth Salander into the movie-going public's corporate mind. She cuts a striking image as the defiant Gothic-punk striding through the prison corridor on the way to court: 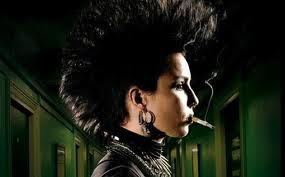 It is good to see from imdb.com that she has indeed been busy since this trilogy

Interesting to see that she has been confirmed as having a role in the Alien prequel - she'll give Ripley a run for her money - never mind the slobbering beast itself!

I also hope that these films give Michael Nyqvist (Blomkvist) greater exposure - although his range (from what I've seen) is limited, the roles he has delivered are all strong performances.

This third film of the trilogy looks even more like being part of the six-part TV series it is. It will be interesting to see what the Hollywood treatment brings to the party when it is released. Nevertheless this remains a solid trilogy, that dips in the middle but finishes strongly. For those who found the inclusion of the graphic scene of sexual violence in the first film to be questionable, its inclusion in the plot is justified by the way in which it is referred to in this film. I am not condoning what was portrayed, but it is a central a defining plot device.

With the seed of the plot centred on the defection of a Cold War Russian spy and covert Government organisations colluding in cover-up to commit Salander to a Psychiatric Hospital for her entire life, it does feel like a work of fiction. Sadly, events of the last decade have shown all too graphically that when Governments feel a pressing need to protect their citizens, they are able to blur the boundaries between what is lawful and just and what is considered to be expedient and reasonable to deliver 'security' in a way that becomes indefensible. Sweden is usually upheld as a model of how nations should behave with its strong tradition of liberal socialism. For me this made the story harder to buy into.

With the DVD and Bluray already available on the continent, UK viewers will have to wait until 04 April 2011 before they can get their hands on an English language sub-titled edition! But don't wait until then - get yourself off to the cinema and see it now while you can.