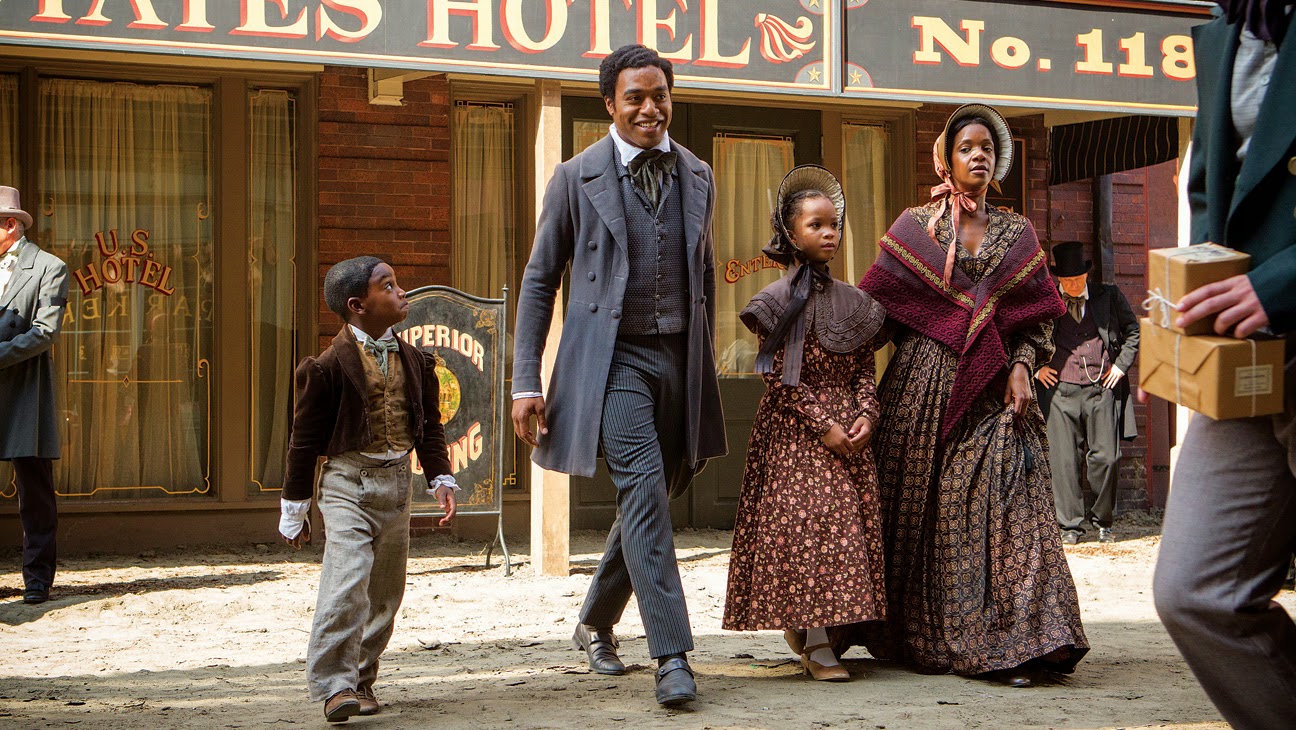 Steve McQueen has built a reputation for directing films that are bodily physical and that confront you with the issue at stake in a way that is unavoidable. This film is no exception. It's visceral depiction of slavery in Southern USA is at times painful to watch. This is a film of deep lows and soaring highs which for me is ultimately a film of hope. Hope for the memory of Solomon Northup (Chiwetel Ejiofor) on whose true story the film is based and hope also that we can end the practises that see 21 million people in slavery around the world today.

The premise of the film is simple and in disclosing it I don't think I will take anything away from the viewing experience. Northup is a free man and a talented musician living in Saratoga, upstate New York with his wife and two children. They have a comfortable life and black people are an accepted part of the community. His family go away on a trip and Northup is offered the chance to make some quick money playing the violin in Washington DC. He accepts but the men who made the offer get him drunk and he wakes up in shackles. He is transported to Georgia and sold in the market as a plantation slave. He soon learns that protesting his innocence only brings trouble and to even mention that he can read and write will end up with him being lashed.

This film could have been so many other things but McQueen chooses to show that as well as gratuitous cruelty and abuse, there were momentary glimmers of kindness and consideration also. He portrays a wide range of characters from the profit driven Freeman (Paul Giamatti) to the conscience pricked plantation owner Ford (Benedict Cumberbatch) to the slave who has become mistress of the house, to maniacal plantation owner Epps (Michael Fassbender) to demonstrate that this story cannot be painted with a simple palette of black and white but with an infinite number of shades of grey. A film about slavery made by a black Director is possibly the only the context in which the frequent use of the term 'Nigger' could be permissible. I lost count of the number of times the word is said. It helped to reinforce the view that those with the money, guns and whips really did see their slaves as no more than a possession to be owned - a sub-human animal no better than a baboon.

Christianity and the Bible feature prominently in this film. For the slave owners, they find justification for owning and mistreating slaves in the Bible's teaching. For the slaves themselves they find hope - hope of a different reality where there will be no slavery. Faith in God produces two very different outcomes.

It is worth noting that most of the plantation owners would have been from British decent and that the prosperity of Liverpool, Bristol and London as ports was dependent on the Golden Triangle of slavery. Having watched this, To Kill a Mockingbird and  Brokeback Mountain within the last few days paints a picture for me that maybe shows that the 'Land of the Free' is only free for the few.

This is an outstanding film. The score is always supportive but never intrusive. The Direction, lighting and camera work are all top class. There is frequent and powerful use of silence and many visual interludes of National Geographic type views of trees, skies or swamps to provide respite from the constant beatings, rapes and killings. It is not pleasant viewing but it is compelling and Northup's story needs to be told - and we need to take note. Thank you Steve McQueen. I'll give it 9/10.

Posted by Duncan Strathie at 17:54