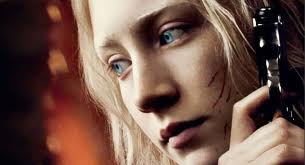 Here we have another in the line of child assassins - the angelic looking Hanna played by Saoirse Ronan. The teenager has been brought up in the frozen wastes of Finland just below the Arctic Circle by her father Erik (Eric Bana) who is an ex CIA agent. Erik home schools Hanna by reading about Blue Whales and Music from a children's encyclopedia. In addition to this knowledge, Hanna is schooled in the arts of the hunter - and the assassin under the guiding philosophy of 'adapt or die'.

In essence this is an action road movie. Once Hanna activates a homing signal, she knows the CIA will come and 'extract' her. Her goal - the one thing she has been trained for all her life is to kill CIA operative Marissa Wiegler (Cate Blanchett). It's not until the end of the film that we are given the back-story to explain why this might be justified. The journey is from Finland to Berlin and takes in some interesting places en-route.

The film moves with an uneven pace - but the soundtrack gave my new sub-woofer a significant workout! There is plenty of action and - yes, more blood. Hanna's efficiency is matched only by her lack of social skills and her degree of confusion over what to do on a date!  The film is extremely well shot with plenty of variation using tight-cropped close-ups and sweeping wide-angles to deliver stunning vistas - especially in the opening 30 minutes. Cate Blanchett is a compelling villain obsessed with oral hygiene and it is good to see the wonderful Tom Hollander playing a camp ex CIA operative (Isaacs) who manages an anything-goes strip joint in Tangier.

I guess the central driving issue plainly shows that two wrongs don't make a right - however well-intentioned Erik and Hanna feel they are. The film operates within a world of moral relativity where individuals and agencies are free to override social norms and protocols in order to complete their self-appointed tasks to defend national security. The back-story that is introduced also adds an ethical dimension to the plot but it fails to justify the ironic deployment of Hanna to kill Wiegler. It is also interesting to note in these days of creeping political correctness that both the main adversaries are female.

There is the usual quota of holes in the plot:

Perhaps I wasn't paying proper attention, but these and other things irk me when I'm engaging with a story. Overall this is a film that does not invite - or merit any deep engagement. It is an action film that delivers tons of action, much of which is unbelievable either in terms of 'how did he/she do that', or 'why did he/she need to do that'. This is an eye candy film that trades on the novelty of a blond teenage killing machine. It tells us nothing more about the CIA which we know will do whatever it wants whenever it wants (just like MI6) with minimal accountability (hopefully unlike MI6). Perhaps I've seen too many of this type of film recently and I'm suffering from blood fatigue? I'll give it 6.5/10.

Posted by Duncan Strathie at 19:52

Wow! So disagree. Luv’d this movie and felt that it was one if the best in that year. Hanna was a well defined Killer in such an unsuspecting body. The head game of disassociating herself from the dastardly acts she was doing and for the purpose for which she was doing it caused a floodgate of thought on my part. Hanna knew her purpose in life, but for that brief moment in time where she risked that family's life (and in real life that family would have been wiped out, but that was not shown) to experience childhood normalcy was a priceless bit of child psychology.

I would be closer to nine out of ten.

I think that Hanna kills just the first wave of soldiers so that they would think that Eric was there and he killed them and left Hanna behind. This was important because if CIA believes that Eric killed the soldiers they would not be so wary about her, making it easy for Hanna to get access to Marissa.

I think they didn't try to capture her before because they were just trying to follow her to her father and capture/kill them both.

Both Hanna and Marissa went on separate paths after Marissa saw Hanna. I believe that Hanna was running in a straight line, rather she was trying to lose Marissa in the forest and as Marissa knew the direction Hanna went in she circled her.