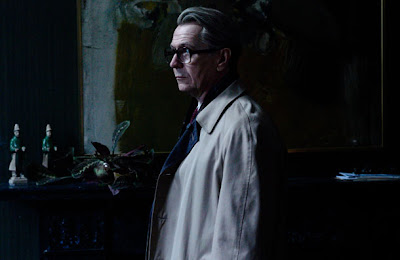 The hype and media interest surrounding the release of this movie is .... fully justified. It is an understated tour-de-force in a drab and monochrome world. A world populated by people who are largely anonymous and who do the dirty work on behalf of their masters - people who kill, lie, steal and cheat to keep us safe. It's an odd world out there.

The central character, George Smiley (Gary Oldman) is a study in the perfection of the reflective observer. Never phased, never flustered, flurried or out-thought. The steadiest hand at the tiller you could wish for. He is ably supported by John Hurt, Colin Firth, Benedict Cumberbatch and, showing his versatility once again, Roger Lloyd-Pack.

For those unfamiliar with John LeCarre's style of writing, this is a stylish spy-thriller full of double-crosses and unsavoury characters. Just when you think you have nailed down the baddies, something happens to cause you to question your judgement. The whole story is illustrated in flash-backs to a Christmas office party and the different relationships, straight, gay and extra-martial that go on. It seems that Smiley is beset by infidelity in both the office and at home.

There are no car chases, no helicopter shoot-outs, no high-tech gadgetry. Just solid character studies of the kind of people who do our dirty work for us and then brush it all neatly away under the carpet. I don't want to say any more for fear of spoiling things for you.

Posted by Duncan Strathie at 21:04

luvd it. But were they trying to hint that Smiley was the "IT"? The ending was strange to me and I did not read the book. I am speaking in code to save those who have not watched it yet.