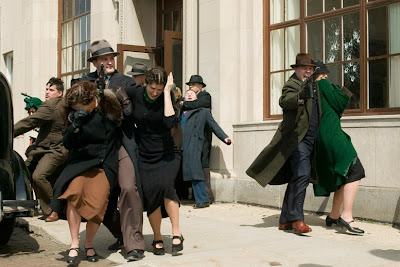 Caught up with this on DVD - and I thoroughly enjoyed it. I don't know how much blood or how many bullets I've seen on screen this week - but the total is mounting!

Jonny Depp stars in the title role of Public Enemy Number One - John Dillinger. Another performance to underline his competent versatility which is in stark contrast to Batman who turns up as a Federal Bureau Special Agent - the not so versatile Christian Bale (although to be fair there was a hint of a regional US accent).

Set in the early 1930's four years into the Great Depression and in the wake of prohibition, John Dillinger feels robbing banks gives a better return than queueing for work. Dillinger is presented as a gentleman bank thief with a high moral code and leader of an effective and loyal gang. Set against him is Special Agent Purvis (Bale) in the fledgling days of the formation of the FBI. Dillinger acquired folk-hero status and as he is taken into custody crowds of cheering supporters throng the streets.

Time and time again, Dillinger brazenly robs banks, kills a few cops and treats his getaway hostages with courtesy and respect. Meanwhile, Purvis uses emerging technologies and scientific methods to try and track down Dillinger and his accomplices. The film maintains a well-paced balance of suspense, threat and escape as Dillinger wreaks havoc across the USA.

Early in the film, a key conversation telegraphs the narrative arc that will book-end this story. In discussion with a fellow gang member, Dillinger is reminded not to get to get involved in women as they will be his downfall. Sure enough, it is through this channel that he is ultimately apprehended.

This film shows not only the extraordinary lengths Dillinger and his accomplices went to, to set up and carry out their raids, it also shows a darker side to FBI interrogation techniques - and this on a woman!

This film does nothing to critique the social and economic context in which it is set - although on both sides of the conflict it seems that the immigrant melting-pot nature of emerging America's population is given specific emphasis.

A thoroughly watchable film with some very good performances. I'll give it 7.5/10.

Posted by Duncan Strathie at 09:46