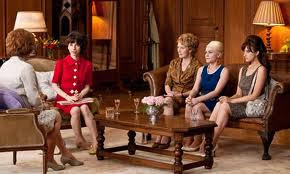 When ordinary people do extra-ordinary things the possibilities for transformation multiply. This film left me feeling exhilarated. It is warm, engaging, believable, well told and very well acted. The setting of the film occupies a corner of my childhood memories. A group of machinists at Ford's leading UK car plant hold the company to ransom by going on strike.

What began as a strike over a regrading dispute leaving the ladies as lower paid unskilled workers, became a fight for equality of pay for women, This is fundamentally a story about justice - social justice. It is also an exposé of the class structure that still pervades British life and the arrogance of the multi-national whose only duty is supposedly to return a dividend to their share holders.

This is so much more than a docudrama. This film invites us into the life of ordinary people struggling against the odds to make ends meet and to make meaning in their life. The central couple are Rita and Eddie O'Grady (Sally Hawkins and Daniel Mays) who do their best to bring up their two children and have a family life. In a memorable speech, Eddie confesses he's not anything special, but at least he tries to provide for his family and he doesn't abuse Rita. Rita responds by pointing out to him that this should be the norm and is not a the behaviour of a saint and this in turn provides the pivot for Eddie's personal epiphany.

We are also reminded that in the 1960's many were still living with the effects of World War II. The leading male character Albert (Bob Hoskins) refers back to his days of fighting Rommel but it is in the difficult relationship between Connie (Geraldine James) and George (Roger Lloyd-Pack again!) that the horrors of the legacy of a war that ended 23 years previously are most keenly and cruelly felt.

An unlikely ally for Rita emerges in the wife of the Dagenham Factory Boss Lisa (Rosamund Pike). They first join forces to take on a bullying school master and later Lisa, frustrated by the way her husband belittles her, lends her full support to Rita - and a designer dress for her meeting with Government Minister Barbara Castle (Miranda Richardson).

The film provides a timely reminder of the cosy and collusive relationship that the Unions enjoyed with the major corporate employers in that era. Power and control were the dominant features - a stark reminder of how a social movement can lose its way. This is reinforced when the Union bosses try to put pressure on the striking women but is challenged at the National Conference when others want to hear directly from the strikers leader Rita herself. She always proves to be up to the task and her speeches are both epic and inspirational as they place matters of social justice at the centre of the debate. This is not a dry political commentary but a film filled with warm and enriching relationships. It demonstrates what can be achieved when people display solidarity to achieve justice. It is possible the outcome might have been different had not the Government Minister responsible been a woman, or had the Prime Minister not been unavailable for consultation at the critical moment. On such things the course of history turns.

The ladies won their day - and rightly so. Why did it take so long? The film asserts in the end-credits that the Ford Motor Company is now held up an an exemplary employer world-wide. When will we see FairTrade cars appearing?

This is as entertaining as it is compelling. The characters and performances are both accessible and endearing. If you've not seen this yet, do get hold of the disc and give yourself a treat. Great stuff. I'm giving it 8/10.

Posted by Duncan Strathie at 08:23