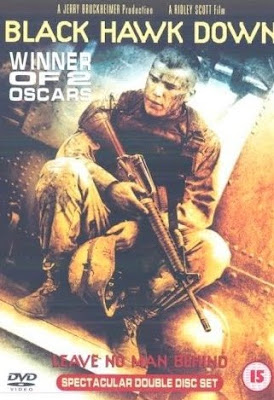 I was visiting a Theological College on Monday and walked into the Common Room to find a group of guys settling down to watch this. I joined them.

I thought that The Hurt Locker was enough blood-spattered modern warfare for the time being. In watching Black hawk Down I was in for a drenching in blood and assorted body parts! The story is set in Somalia in 1993 when the Americans enacted a mission to capture two lieutenants of the Somali war lord Mohamed Farah Aidid. The raid was successful but in withdrawing a Black Hawk helicopter was shot down and when another went in to rescue the occupants, it too was shot down by RPG. A task force of 100 US Rangers and special forces troops were despatched to recover all personnel and destroy what remained of the helicopters.

They encountered much stiffer opposition than they anticipated and the operation turned into a 15 hour fire-fight with much close quarter combat. The General commanding the operation was forced into committing an ever increasing number of resources to mount a recovery operation. Ridley Scott captures the visual reality of modern warfare where high-powered bullets shatter limbs and RPGs cut bodies in half or pierce torsos without detonating. It is bloody, gruesome and in-your-face. Not for the faint-hearted.

It ends with the Americans withdrawing all their men except a captured pilot - Durant. The movie ends with "1000 Somalis died and 19 Americans lost their lives in the conflict (the 19 soldiers and officers who died are then listed by name and rank). Mike Durant was released after 11 days of captivity. On August 2, 1996, warlord Mohamed Farrah Aidid was killed in Mogadishu. General Garrison retired the following day."

What the film fails to do is portray the real reasons the Americans were there (a unilateral UN?) and to show the Somali's as little more than mindless violent and bloodthirsty thugs. Why do Americans elicit that response where ever they intervene abroad? Some of those involved in the production were critical of the final version as it played down any understanding of the complex relationships between the Somali militia and played up the heroic exploits of the US military. As cited in Wikipedia: In a radio interview, Brendan Sexton, an actor in the movie, said that the version of the film which made it onto theater screens was significantly different from the one recounted in the original script. According to him, many scenes asking hard questions of the U.S. troops with regard to the violent realities of war, the true purpose of their mission in Somalia, etc., were cut out. Sexton wrote an article in 2002 where he maintained that Black Hawk Down failed to explain the reasons behind the Somali population's opposition to the U.S. military presence in their country: 'The Somalis are portrayed as if they don't know what's going on, as if they're trying to kill the Americans because they — like all other "evildoers" — will do anything to bite the hand that feeds them. But the Somalis aren't a stupid people. In fact, many were upset because the U.S. military presence propped up people tied to the old, corrupt Barre regime.'

Gripping, dirty, as realistic as I want to see and probably way short of the actual horror of war. I'll give it 7/10 as a movie and 3/10 for a selective retelling of history from the perspective of the winner.
Posted by Duncan Strathie at 09:02