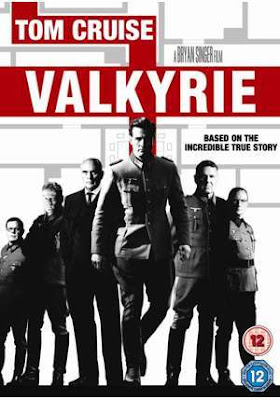 A story that needed to be told - and needs to be retold, often.

Based on a true story, this film rightly has an all-star cast led by Tom Cruise (Von Staufenberg)in a performance that is every bit a good as A Few Good Men. Tom Hollander who is currently starring in BBC TV's Rev gives a good performance as does Eddie Izzard who plays a Nazi General! Bill Nighy, also playing a General, inhabits a role he has made his own in countless TV dramas and movies - indecisive, lacking in confidence, a wimp of a man whose greyness is only outdone by his lack of conviction. Carice van Houten also turns in a worthy performance as Cruise's wife.

The story opens with the sound of hundreds of soldiers taking the oath of absolute allegiance to Hitler. It then switches to North Africa with Von Stuafenberg making an entry in a personal diary where he decries the scale of the loss of life and the blindness of those leading his country. Shortly afterwards his unit comes under British fighter attack and he is wounded resulting in the loss of an eye, a hand and two fingers. He is reassigned to Berlin and a desk job.

His views about the Nazi leadership being known, he quickly falls in with a group plotting to overthrow Hitler and negotiate an immediate cease-fire with the advancing allies. Together they plot to blow up Hitler in his bunker and trigger Operation Valkyrie. Valkyrie is a standing order to mobilise the German reserve army to defend the homeland. There are turns and twists along the way, so I won't spoil the story or the outcome. The narrative is largely believable and suspense is well maintained throughout.

The story and context raise all kinds of questions about 'just war' and how those opposed to their national leaders should act. It is hard to ask whether those involved in this plot could or should have done more. For me their odds of surviving such an attempt were always low so would a more direct suicide mission have improved the chance of a successful outcome? It's so easy to ask that of someone else. What would I have done - what would you have done?

Hindsight always gives us 20-20 vision. At the time with the real and present pressures, not really knowing who could be trusted and who might betray you, not many would have had the courage to follow their convictions. The film fittingly ends with the inscription from the resistance memorial in Berlin.

A good story of heroism and courage that is well told. I'll give it 7/10.
Posted by Duncan Strathie at 11:45