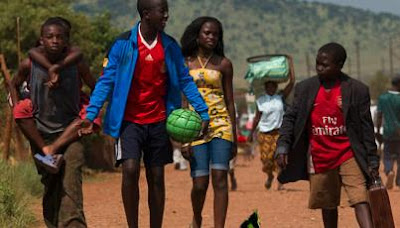 All right, this film does have some serious shortcomings in terms of story and script - but it will leave you with a warm smile on the inside. Some have dubbed it an African Slumdog Millionaire - and this is a fair thing to say - but this one is easier on the eye.

This is a 'road trip' movie - that is, the story is told in part by the journey the characters undertake. It is also a story within a story within a story. It is simply told and the main five characters are all children - from three different countries. This is not a film about football - it begins with Dudu showing us how to make a football out of a condom and yes it ends at ... well I won't spoil it for you.

The condom is present because HIV/AIDS is one of the threads that weaves the story. Another is child sex workers, a third is refugees, a fourth is child soldiers and war, an another gives a wonderful picture of Zimbabwe's economy going down the drain as some of its banknotes head towards Victoria Falls.

The plot is as unlikely as the characters are likeable. That doesn't matter. What does matter is the warmth and ingenuity displayed by the members of 'Team Africa'. This draws the viewer in and is quite simply irresistible.

Some of the threads of the story remain undeveloped whilst others are present throughout. This for me was disappointing. It was almost as though the film-makers lost their nerve. Maybe it was a limitation imposed by working with so many children. However, the ending is bitter-sweet as one of the threads works inexorably towards its horrible conclusion.

Do go and see this - it's immense and will in time become a sleeper hit I'm sure. In five year's time most homes will have this on DVD!