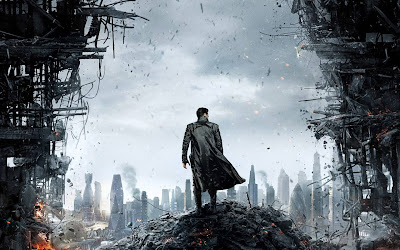 This film offers a perfect blend of Roddenberry's utopian liberal society and a tongue-in-cheek homage to the characters quirks and failings with cutting edge CGI and a well written story acted with conviction and passion. It's rather good. I'm not going to give any plot detail away but I will address a few issues the film raises - hopefully without giving anything away.

The film has spawned 'Pine Nuts' who are fans of Chris Pine who plays Kirk and 'Cumberbitches' who are fans of Benedict Cumberbatch who plays the baddie. There are fine performances from the other characters and jarringly English rose amongst gung-ho Americans and Vulcans etc in the form of Alice Eve who plays Science Officer Carol Marcus.

This film is essentially about two things:

and how you do one or the other to do the right thing. Doing the right thing and doing the thing right are not the same thing! The story raises a pile of issues that pose moral dilemmas and time and time again the characters are tested - often to the limit. This is not a simple story of baddie versus goodie - it is both more complex and more subtle than that.

It is great to see a Tribble again - and central to the story! The CGI contribution is truly amazing with seamless blending of the real with the virtual. The soundtrack offers some good songs at appropriate moments. The film is shot with lots of close-ups where a head fills the screen leaving me with the feeling that much of the acting effort is expended in re-emphasising the core characters' personalities which are played much more strongly and directly than in the original TV series. Okay, there are one or two passages that are little over-long but on the whole the pace is well maintained throughout. Well done J J Abrams.

This is an excellent film - believe the hype and go and see it! It is great to see Cumberbatch in such a strong role and playing a baddie and a cast that offer three dimensional characters. The action is pretty well non-stop and some interesting relationship twists provide a richer plot than the usual. I'm giving this an 8.5/10.

Posted by Duncan Strathie at 21:49