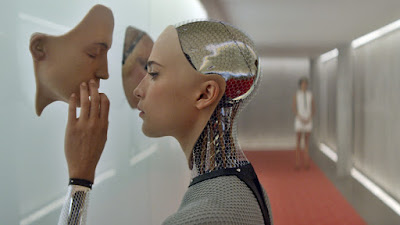 I knew from watching the trailer that I wanted to see this film. Caught up with it on disc last night. It was even better than I had thought it might have been. This is not just a sci-fi thriller about Artificial Intelligence (AI) but an exploration of what makes us human - good and bad. I imagine that female viewers could see a different movie to male viewers. Is this film misogynistic or does it offer a rallying cry for feminists?

As a low budget (£15m) British made film it can hold its head high as it takes its place alongside other AI movies (AI, Terminator, Blade Runner, The Matrix and I, Robot et al). With only four characters for most of the film it is a gripping tale that explores how convincing the AI being Ava (Alicia Vikander) is when pitted against programmer Caleb (Domhnall Gleeson). The experiment unfolds in a remote 'research facility' owned by Caleb's reclusive genius billionaire boss Nathan (Oscar Isaac). The experiment is to see whether or not Ava passes the Turing Test - that is to exhibit behaviour that is indistinguishable from human behaviour. The fourth character is Nathan's 'servant' Kyoko (Sonoya Mizuno).

The twist is that the test is clouded by Ava's sexuality, her ability to flirt and use her feminine charm to trick her male captors. In one exchange this dialogue unfolds:


Nathan: Answer me this. How do you feel about her?
Caleb: Her AI is beyond doubt.
Nathan: No, nothing analytical, just, how do you feel?
Caleb: I feel that she's amazing.
Nathan: Dude! Now the question is, how does she feel about you? Does Ava actually like you or is she pretending to like you? Self awareness, manipulation, sexuality, now if that isn't true, now what is?

How you might read the film depends on whether you see Caleb or Ava as the main character. Ava is the latest in a series of AI women created by Nathan - all of which are 'fully' functioning. On one level they are sophisticated sex dolls and it is clear Nathan prefers interacting sexually with 'robots' rather than the real thing. But there is the difficulty - Ava is so real and so clever she outwits both Nathan and Caleb.

There is a long tradition of eroticised female robots/cyborgs and animations - particularly in video games and Japanese anime and manga. Perhaps this is simply continuing in and drawing from this heritage? Or does it take things to a new level? It is easy to forget that Ava is Alicia Vikander with all her Swedish beauty on show. The CGI elements of the film are truly amazing and for most of the film she appears half human, half machine. However, by the end of it she appears much more one than the other and how the film ends will leave you satisfied or frustrated depending on whether you see Ava or Caleb as the central character.

I really enjoyed this film and was surprised by it's twists on more than one occasion. Just when I thought I'd worked something out, I got it wrong. As a guy, I think you have to allow yourself to be fully immersed in the story and suspend judgement for the magic and seduction to work. It would be interesting to get an objective female perspective on what the film's central story is. This is well worth seeing to explore themes of human being and identity, sexuality, AI and the feared threat that AI passing the Turing Test potentially poses. I'll give it 8/10.

Posted by Duncan Strathie at 20:41