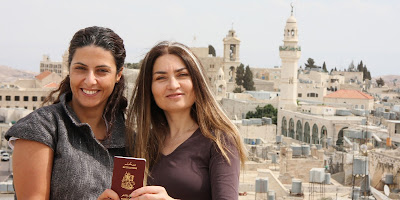 This 2014 documentary is written and Directed by Leila Sansour who left her home town of Bethlehem at the age of 14 because it was too small and a backwater in the shadow if its neighbour Jerusalem. When she learns that the city is about to encircled by a wall she returns and begins a fight to keep Bethlehem open.

This film captures Sansour's energy and dynamism as she recruits family and friends to support the cause. As the wall is imposed on people going about their daily lives in their home country, the hegemony of US backed Israel is made plain for all to see. The eight meter high wall creates an apartheid that the world seems disinterested in and impotent to challenge. Some Palestinians are doing unspeakable things to Israelis - but it is the few and not the many.

We see Palestinian farmers showing their ancient olive groves that have been destroyed by the Israelis. We see houses being destroyed - longstanding family homes - simply to make way for polished new homes for Israeli settlers who will be connected by the antiseptic umbilical of new roads directly into the heart of Jerusalem whilst the locals have to queue at the checkpoint from 03:00 to stand even a chance of getting to work. Many won't make it because the number of daily permits is limited.

The intifada began in Bethlehem amongst students at the university - founded by Sansour's father. This together with her regret at having abandoned Bethlehem earlier in life drive her to extraordinary lengths as she builds a coalition of unlikely backers to campaign for Bethlehem to be made an open city. As part of the campaign the Mayor agrees to the creation of a Bethlehem Passport and these are distributed to celebrities and politicians to gain publicity. There are high level visits to the UK and the USA but ultimately the campaign runs out funds and money and fizzles out. The film ends in 2014 as Sansour tries to reinvigorate the campaign and take on the Israeli state.

This is a desperately sad film that depicts callousness on the part of the Israelis as they annex one of Christianity's holiest sites. Many Christian leaders are shown visiting the Church of the Nativity in the film - including Archbishop Rowan and Bishop Tutu also puts in an appearance on the film.

Please take a moment to check out the project's website and consider your own response - or buy the DVD from them and show it to a group of friends or in your place of worship. This is a solid film documenting a worthy cause. I'll give it 7/10.

Posted by Duncan Strathie at 17:58