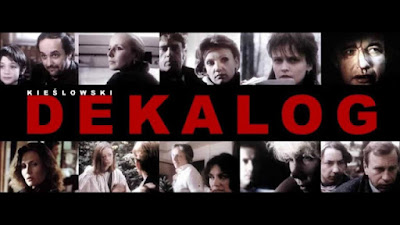 I really like the stories told and through them the films made by Polish Director Krzysztof Kieślowski and have all his films that are available on disc. At our monthly gathering in the parish, friends randomly chose the number 7 without knowing why they were choosing and so elected to watch an hour long film loosely based on the 7th of the Ten Commandments - " You shall not commit adultery". Interesting.

Kieślowski has the knack of rendering every day people going about their every day lives and sharing the kind of experience that you and I might experience. This movie is set in the anonymous suburbs of Warsaw, Poland and is from a set of 10 originally made for TV in 1988 - made whilst Poland was still a Communist autocracy. It's ordinariness is the thing that allows it to connect and spark a wide range of reactions amongst those who watch it.

The genius of the story-telling is that the film begins when the fruit of an adulterous act is already six years old and the mother and father have been estranged since before the child's birth. This is not so much a story about adultery but about the fact that actions have consequences and they can escalate and get out of hand very rapidly once lies, pride and deceit are used to cover something up. I say 'adulterous act' but the two involved were not married to each other - or to anyone else as far as we can glean from the story. So the first question is 'what constitutes adultery"?

And the questions just keep on coming. They draw the viewer in and invite speculation about the back story and about so much of the story that isn't told directly through the film. How three female generations of the same family can be so dysfunctional when the Matriarch is a former headteacher is good one. Is Stefan (Wladyslaw Kowalski) ineffectual through inability or because of Ewa's (Anna Polony) domineering? At the start Majka (Maja Barelkowska) appears to be about to be finishing a university degree but her actions then and subsequently suggest that her ability to make sound judgements is at times severely impaired. This is just one of many issues that could be explored regarding her character. What of Wojtek (Boguslaw Linda)? Could/should he have done more? How culpable was he for the mess? Do you think he had paid a sufficient price for his peccadillo or was he due to pay more and if so how much and for how long? And what was to become of little Ania (Katarzyna Piwowarczyk)?

I am still coming up with questions such was the story-telling and invitation to engage. I think Dekalog would make a great Lent Course if it could be fashioned into six sessions or so. Two of the films, Five and Six were expanded into full theatrical releases with the same cast and largely similar plot - A Short Film about Killing and A Short Film about Love.

In the 2002 Sight & Sound poll to determine the greatest films of all time, Dekalog and A Short Film About Killing received votes from 4 critics and 3 directors. Additionally, in the Sight & Sound poll held the same year to determine the top 10 films of the previous 25 years, Kieslowski was named #2 on the list of Top Directors, with votes for his films being split between Dekalog, Three Colors Red/Blue, and The Double Life of Veronique.

I thought this was a great film. It is currently rated at 97% red on Rotten Tomatoes and 91% on IMDb. If you don't know Kieślowski do go and check out his substantial body of work - you won't be disappointed. I'll give it an easy 9/10.

Posted by Duncan Strathie at 15:55