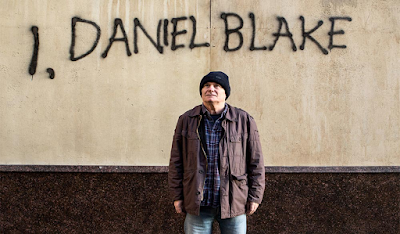 It is a strange feeling to be in close proximity to 500+ other people, seven miles up at 600 miles an hour and to be sobbing uncontrollably. Such is the power of this film to evoke a strong emotional response. It is a damning indictment of modern British society that such a film could be made - a film that is sadly more documentary than fiction. For those of us who don't move in the world of job seekers allowance and benefits, it offers a glimpse into an existence that is all too common to too many people.

This film challenges notions of collective social responsibility, highlights the individuality of the case of each claimant and the cruel reality of austerity in the face of the 2008 financial crisis. The points it makes transcend party politics. It is a call to simple humanity, respect and the offer of an invitation to love your neighbour as yourself. Why is it so hard to make things work more equitably?

The unpleasant and gritty reality of the film is amplified by being set in the North-East of England amongst the wonderful people of Newcastle. An area of the UK to have suffered more than its share of job losses and deprivation over recent decades. The characters in the film are compellingly believable and the acting performances - particularly from the two central characters, outstanding. Dave Johns as the titular Daniel and Hayley Squires as lovable Katie weave a web of interdependency that anchors the story to a place of hopeful dark reality.

The portrayal of Job Centre staff is mostly less than kind - they are in an impossible situation and although there are undoubtedly some jobsworths that delight in creating eternal spirals of bureaucracy, there are many others with a generous heart who do not delight in the plight of those they serve on a daily basis. The anonymisation of 'the system' is dehumanising and the fact that determinations are made by someone called 'The Decision Maker' who remains invisible, further alienates people seeking support and feels more like something from Orwell's 1984.

It is clear that the British social security system is broken. How can someone who is advised by their National Health Service Doctor not to work as they continue recovery from a heart attack, be compelled by another part of the National system to demonstrate that they are seeking work in order to continue receiving benefits? How can that system expect a man who has worked all of his life with his hands to be computer literate and compel him to create a neatly laid out and printed CV? Where does he pick up the necessary skills and how easily can he access a computer? How are such things to be paid for?

I'm sure there are some folk who play the system for all they can get. What this film demonstrates - and it seems to accepted as de facto - is that the system is loaded against the 'man/woman in the street' who needs some help to enable him/her to get by until such time as he/she can get back into work. Or loaded against the single mum forced to relocate hundreds of miles away from her circles of support, who ends up being driven into supporting her family through less than ideal ways?

This is a powerful yet ultimately very sad film. It contains many glimpses of the best of human nature but ultimately these offering are snuffed out by a system that seems predicated on a philosophy of saving the state money, of issuing unwarranted sanctions willy nilly and most alarmingly of failing to see fellow human beings as such. It paints a picture that is dehumanising.

Director Ken Loach continues to deliver keenly observed and conceived films that highlight the human condition. This is an important film that spotlights the pressing need to hold to account those who govern supposedly on our behalf.  To award it a score with boxes of popcorn would be an act of trivialisation. This film stands above such things.
Posted by Duncan Strathie at 07:28