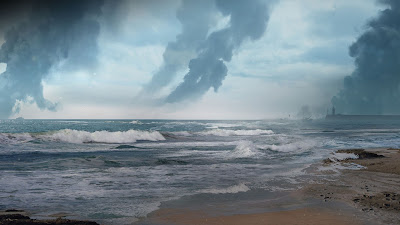 Written, Produced and Directed by Christopher Nolan this is a big film in every way - a film whose creation had a number of significant risks attached. To make a film about one of Britain's pivotal moments in recent history always runs the risk of not getting it right and so blighting something held as sacred in the nation's collective psyche. To shoot in IMAX means it is shot for the big screen and so to watch on any other format will potentially never deliver the optimal experience. For such a big film to have minimal dialogue and an almost docudrama feel was a creative risk. To employ thousands of extras and involve historic boats that were actually there 75 years ago were huge risks. To make a film with a budget in excess $100M was a huge financial risk. To use such a distinguished ensemble cast that features  Fionn Whitehead, Tom Glynn-Carney, Jack Lowden, Harry Styles, Aneurin Barnard, James D'Arcy, Barry Keoghan, Kenneth Branagh, Cillian Murphy, Mark Rylance, and Tom Hardy could also have been an artistic risk. Yet it all works - and works rather well!

The disappointing thing for me was that I watched it on a seat back 7 inch screen. However, I was engrossed for the entire 106 minutes and whilst everyone knows (or should know) the final outcome, how this film chose to tell the story was clever and very creative. Woven together are two strands of thread each of which has three elements. The first is to see the drama unfold on land, sea and in the air which emphasises the unique contribution made by each of the three branches of the military - and in the case of the Royal Navy, civilian too! The second is the the portrayal of three subplots each of which focused on one hour, one day and one week. These were edited in and out of the story as the final Dunkirk tapestry was woven by master weaver Nolan.

The action is persistent but there are lulls - never long enough to wish for more action as the action we see is the kind of thing most people would rather not have to watch - particularly as it depicts acts of sacrifice and heroism to secure our/my freedom. For a film about British identity, indestructible optimism and resourcefulness, and escape from a beleaguered Europe to be released in the midst of the Battle of Brexit is as ironic as it is intriguing as it is amusing.

As mentioned before, there is minimal dialogue. The action, sound of war, huge vistas and over prominent Hans Zimmer score all fill the auditory and visual senses to overload. The film offers a sensorily stimulating engagement. War is messy and at times undiscriminating. It often leaves no real winners. The absence of women in the film is more a reflection of the reality of how it was on the battlefield I suspect, rather than an attempt to make a different statement.

This is an excellent film in nearly every way. At the time of writing this reflection is has grossed globally more than five times it's budget - so another risk averted. With the awards season in full swing it is worthy of its eight nominations in the Golden Globes, three in the BAFTAS and eight in the Oscars and with it riding high in review ratings on IMDb (8.1) and Rotten Tomatoes (92%) I will agree and award it 9/10! Do watch it if you can. Good film making, accurate portrayal of the horrors of war and good acting.

Posted by Duncan Strathie at 08:19

I think you got it right/wrong about the score. As with Blade Runner 49 the scale of the music is matched when seen in IMAX, and can seem overblown in smaller media. But I agree with you completely about the films virtues.