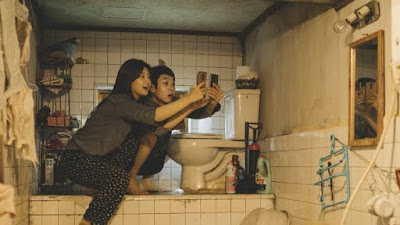 If you've not seen this film and intend to, stop reading now and get down to the cinema - one with a great sound system as the sound in this film is wonderfully 360 degrees. (Thank you Everyman Birmingham.)

You cannot have escaped the hype surrounding this fim as it won many BAFTAS and the next week cleared out the Oscars. Is the hype justified? It's certainly an engaging film with a very clever narrative which delivers a massive unexpected and unforeseen twist at a critical point. The cinematography is top class and the ways in which the visualisations of the sets and their relative positions reinforce the core of the story, are masterful.

Whilst it has clearly charmed international audiences and juries around the world, I wonder if Koreans don't get a whole lot more out of it than Westerners? I had the feeling that many clever subtleties passed me by. The whole premise of always seemingly needing to have a plan even when the plan might be not to have a plan possibly means something more in Korea. When is opportunism simply deception? When is it wrong for people who are capable of performing a job but are unable to gain employment simply because they don't hold the right certificates or qualification to actually seize an opportunity for work when it presents itself?

The film is very clever in the way that it invites many questions without really delivering any  answers. The premise of the film is straightforward enough but the way in which it is enacted delivers a real life fantasy where we are made to believe things simply because they happened in the film - but isn't that a hallmark of great storytelling? The ensemble cast have no weaknesses and deliver performances where the comedic elements are always implicit leaving you to draw them out and appreciate them.

Ostensibly this is a film about different socioeconomic classes, about the haves and the have nots. The key line in the dialogue is "They're rich, but they are still nice" as though wealth makes good people bad and poverty makes bad people good. From the sub-basement squalor of cockroach and urine infested urban dwelling to the breezy and airy luxury of the hilltop mansion, this film is littered with visual and plot contrasts that never resolve themselves. That is left to the viewer. I am still unsure who is the parasite in this film! There are several candidates and the film holds up a mirror to the viewer. What was the rock about? Was it significant or did it only have significance because the son says it's significant? Its place in the story certainly changes as the narrative unfolds.

This film is multi-layered and the meaning of the layers, the narrative and the symbols are never really defined by the film itself. It's the highest form of audience participation - you decide! The film could so easily have become too clever or kitsch but avoids these potential problems and stays true to what it has to say - whatever you decide that is. There are goodies and baddies, victims and perpetrators, lucky and unlucky, hard workers and consumers of luxury. You work out which is which. It keeps flipping as the different layers come to the fore in their own turn.

It's certainly a great film but is it worthy of the hype when films like The Irishman, Lighthouse, Joker  and 1917 were very strong award contenders? Did it do so well simply because it is an international (we're not allowed to say foreign language any more) film, or is its artistic merit worthy of clearing out the Oscars? Well - that's something else for you to decide! I'll give it 8/10.

Posted by Duncan Strathie at 16:13