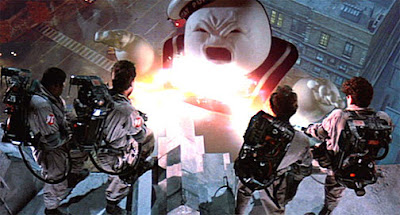 In just 10 days time I shall be amongst the gothic skyscrapers that form such a natural backdrop for this ghost-fest that pits science-fantasy against Ancient Near East heavyweight supernatural demigods. Nearly 30 years-old this classic comedy still holds its own. The conceptualisation, the script and a tour-de-force performance from Bill Murray all ensure that this film not only deservedly gained cult status but is able to hold its own in the top league of cinema - even today.

The special effects are of their time - but then the whole film is so they don't look out of place! There are one or two scenes that are still scary - especially the fridge from hell! The sets and props all fit together so well - the archetypal library, the anonymous university with it's anonymous academics, the boiler suits and cheesy nuclear backpacks, a green blobby ghoul, the refurbished fire station and of course the recycled ambulance - an inspired cocktail of ingredients.

The story manages to draw on the cultic worship of ancient Sumerian deities which is set against quotations from the Book of Revelation that give an appropriately apocalyptic feel as the film builds towards its climax. The bringer of doom is a giant Stay Puft Marshmallow Man (obviously meaningfully significant in the USA) who in wreaking havoc stamps on a church. It is this act rather than any of the other random acts of destruction that seems to motivate our heroes to finally see off their adversaries and "cross the streams" to destroy Gozer once and for all.

Why is this film so enduring? There are still fancy dress and sing-a-long screenings taking place around the country. It was the biggest grossing comedy of the 1980's and that was against tough opposition. On IMDb it achieves a rating of 7.8/10 from more than 120,000 users. The theme tune remains evergreen and has even been resurrected for use in a UK TV commercial. The dialogue has given us enduring quotes - "We came, we saw, we kicked its ass" and "I've been slimed". The fire station has even been resurrected by Volkswagen's See Film Differently campaign.

Posted by Duncan Strathie at 15:24