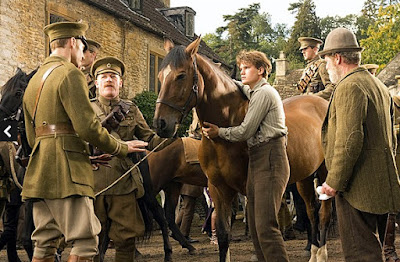 I don't know if you've ever kept some honey for too long so that when you come to use it, it almost defies gravity as it gloopily drips from the jar? Such is the sentimentality with which this film drips from the screen as it sets up one potentially heart-wrenching climax after another as it spoon-feeds the viewer clue after clue about where the story is going next. I didn't enjoy it.

Added to which I felt there were real problems with the lighting and some of the shot angles. The Disneyfication of Dartmoor happens amid random acts of lighting with seemingly infinitely variable shadow effects between adjoining shots. The stereotyping of gentry and serf is done with no sensitivity and you instinctively know that both the horse and his owner will survive and be reunited at the end of the war. Of course the work of the story is to get to that point but as I said I feel it is heavily flawed and the fact that it won none of the six Oscars it was nominated for may suggest others saw through it.

Spielberg consistently portrays the best and worst traits of human nature in his movies and this one is no exception. He also consistently champions the underdog and again this film delivers in spades. I have not read the original (children's) book or seen, what is by all accounts, the exceptional stage play but I wonder if they are as sickly sweet as the film? A reviewer on IMDb described it as Lassie meets Saving Private Ryan - I think that's a good call.

Yes this film shows triumph over adversity - again and again - it shows the horrors of war and the hope that exists for humanity in the midst of no-man's land. It contains very clever filming techniques as I presume that no animals were harmed in the making of this motion picture. It also shows that when you are really up against it you need German engineered wire cutters to get out of trouble and it's always good to know a Pete from Dusseldorf!

Well - there you have it. As I'm sure you are by now aware, I'm not going to commend this to you. I know it's a 'marmite' film (you either love it or hate it) but I can't really give it any more than 5/10.
Posted by Duncan Strathie at 20:46

So, read the book! Usually better in any case ...