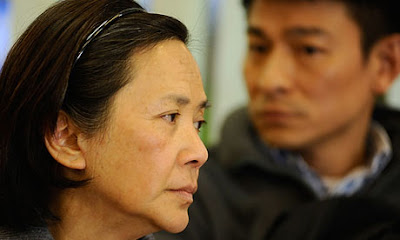 This is an intimate and gentle film about honour, respect and service. It is set in Hong Kong and is in Cantonese with subtitles. Ah Tao (Deannie Yip) has been the servant for the Leung family for 60 years and has faithfully served 4 generations. Most of the family now live in the USA but Roger (Andy Lau) remains based in Hong Kong although his work as a film producer takes him away to the mainland quite often. One night he returns from a business trip to find Ah Tao collapsed in the flat - she has had a stroke. Determined not to be a burden to Roger or the family she decides that on discharge from hospital she should move into a nursing home to be looked after.

After 60 years of faithful service Roger does all he can to ensure that Ah Tao is well looked after. He makes regular visits to her in the nursing home and is encouraged by the progress she makes through physiotherapy. However, Ah Tao is always mindful that strokes seldom come alone and that she will be prone to another one. Having lived with one family for so long, we see the painful transition Ah Tao has to make to become part of the community that shares the nursing home with her. Determined to do so on her own terms she wins over the staff and residents and soon becomes a gentle though prominent member of the community.

Roger is single and seems happy with that status. He devotes a lot of time to Ah Tau when he is in Hong Kong and displays nothing but generosity and gentleness towards her. When one of his films is premiered he takes her to the grand opening and party afterwards passing her off as his Godmother as the stigma attached to being a servant would undermine the participation of both of them.

This is a quiet film, sometimes with sparse dialogue. At times it takes on an almost fly-on-the-wall documentary feel with its jerky hand-held camera work and people often talking over each other while the subtitles struggle to keep up. The film relies on great acting from the two leads whose gestures and glances often communicate far more economically than the fullest of spoken dialogues. Through observing the other members of the nursing home community we are drawn into their stories and families and the festivals and celebrations that are important to the Chinese community - including celebrating mid autumn!

At nearly two hours long and being slow paced, it does require a certain degree of dedication to stick with it. However, you will be rewarded by a warm human drama that is a source of hope and inspiration for how we might all better conduct our relationships. I thought it was well worth the investment. I'll give it 7.5/10.

Posted by Duncan Strathie at 11:05

Hi Duncan
I always enjoy reading your thoughts and adding titles to my "list" Thank you.
I do have one quibble with your rating system: You score on a 10 popcorn-bag rating but then you give 1/2 marks, so it's really out of 20. (Siskel and Ebert only had 2 thumbs!) I know it's all pretty subjective, but really what is the difference between a a 7 a 7.5 and an 8?

Shawn - a very good question. Thanks.

I guess I want to have my cake and eat it, and as it's my blog, when I can't decide between a 7 and an 8 I hedge my bets and sit on the fence.

Apologies to mathematicians and statiticians. This is a subjective art, not an objective science. How a film leaves me 'feeling' differs from viewing to viewing and so may attract a different score.

I guess what I am trying to say is anything 7.5 and higher I would be happy to recommend for anyone to enage with - not necessarily to 'enjoy'.