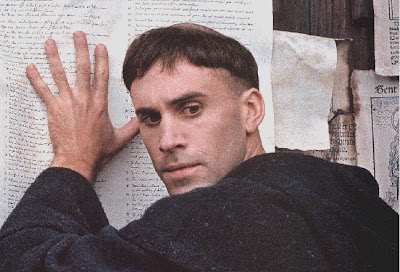 History is always written by the victors. This 2003 biopic of the angst-ridden Augustinian monk fighting against his conscience and the Roman Catholic Church is selective in the history it portrays - and omits - and delivers a popular hero that changed the course of world history.

Joseph Fiennes delivers a performance with conviction and compassion that portrays Luther as the conflicted, almost possessed, guilt-ridden sinner destined to burn for eternity in the fires of hell who then becomes the self-doubting unintended leader of a popular movement. This is a Luther who is more concerned with the plight of the poor and down-trodden than with the finery of the nobility. A Luther who is offered many opportunities to save himself but who holds firm in the face of immense pressure and intimidation to seek a greater salvation. A Luther who rejects the adulation and acclaim of the masses and urges everyone - peasants, nobility and Church hierarchy - to follow Christ and share his love by the way they live.

Where this film excels is the way in which it shows the political manoeuvrings of the various heads of state and their desire for self-determination. This fight mirrors Luther's own battle for his 'sola scriptura' based self determination free of the tax-gathering strictures of the Roman Catholic Church that fed the profligate and hedonistic lifestyle of Pope Leo X. The scenes in Rome of brothels for priests and indulgences for all who will pay, the opulence of the Papacy and the punitive acts of penance meted out by well-fed priests are well portrayed as Luther's ire rises. Not given to doing things by halves, he resolves to rediscover a purer Biblical way of living the Christian faith freed from the accretions of a Church with an insatiable appetite for collecting taxes. On his return from Rome he is intercepted by friends who secret him away before harm can come to him and as he begins translating the New Testament into German so the peasants begin to rise up against the Church and their rulers.

It is clear that Luther had a very sharp mind and was a persuasive orator. He used the developing political climate to encourage the regional nobility to defy the Holy Roman Church with the incentive of becoming Saxons (Germans) rather than Roman puppets. Luther also quelled the rioting and insurrection in Wittenberg drawing people back to a more peaceful and Gospel-centred way of living. With 100,000 dead, the threat of Turkish invasion, fires burning and civil war also a real threat, things came together to bring a new direction for the followers of Luther who lined up behind the Augsburg Confession in 1530. Released from the vows of his Order, he married a runaway nun - Katharina von Bora and they raised a family together in Wittenberg.

Last year I had the privilege of attending a week long preaching conference hosted by the University in Wittenberg where Luther was Professor. Many cultural and historical events were organised and so we immersed ourselves in the life and legacy of Lutherstadt for a week. To have walked the corridors of the 'Luther haus' and seen where his friend and colleague Philipp Melancthon lived, to have seen an original indulgence chest with it's slot for the peasant's coins, to have visited Luther's pulpit at the town church and to have walked through the door of the Castle Church on which he nailed his 95 theses (or not) - these were all poignant reminders of how our understanding of living a life of faith and how to be Church has always been a moot point. Luther was a prophet who called God's people back to their Creator. Who are the prophets today, what are they saying and how does being a disciple of Jesus Christ manifest itself here and now? Is it any different to the call Luther made?

For me the film was a bit too long - too much hand wringing and confessional pouting. Set alongside the other cinematic offerings of Luther's life, this is a useful addition. (I wish someone would make a similar biopic of Thomas Cranmer!) It would do us well to remember that the film was in part funded by the Lutheran Church, and as I said, history is always written by the victors. The town of Wittenberg-Lutherstadt was already making preparations for the 500th anniversary of the nailing of the 95 theses - no doubt pilgrims will visit and make their votive offerings at the many tat shops. I wonder what the man himself would make of that?

This remains an interesting historical drama giving a helpful insight into the founding of one of the the world's major Christian denominations and an episode which helped to empower the Reformation more widely across Europe. I'll give it 7/10.

Posted by Duncan Strathie at 08:23