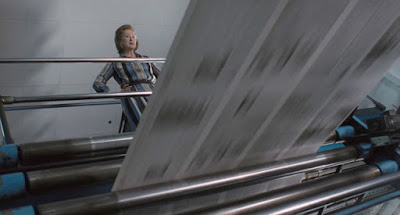 I didn't realise that this was a 'Spielberg film' until the end credits! The narrative is driven not by the acquisition of classified and sensitive government papers regarding the USA's clandestine  involvement in Vietnam over many years, but in the development of Meryl Streep's Kay Graham who moves from timid victim to decisive leader during the course of the film. At nearly two hours long this film relentlessly ground its way to its inevitable conclusion. The only excitement being provided by the suspense of how it was going to get there.

The film is set in the years 1966-72 with the twenty year long Vietnam War in full swing. Where the film does score big is in flagging up the First Amendment to the American Constitution giving the Press freedom of expression as it serves the governed and not the governors. It seems that there is hardly a decade that has passed since WWII that this maxim hasn't been bent and tested to breaking point. The focus of the film invites the viewer to conclude that nothing has been learned and that the current US Administration is at it again. This makes it an urgent film for today.

That this film was rushed out in between other projects, possibly explains the lack of the usual Spielberg dynamic, but its message to today's audience is as well targeted as any of the missiles underneath Mr Trump's big button. It makes plain the current threat to erode and undermine the freedom of the Press and the persistent inability of succeeding administrations to simply tell the truth. It is political drama of the most urgent and current type.

Without the performances of Streep, Tom Hanks (Ben Bradlee) and Bob Odenkirk (Ben Bagdikian), this film would have struggled to stand out. Kay Graham was a mother and a socialite who at the age of 40 inherited the family business and became Publisher of the struggling Washington Post. She had no experience of the workplace and was driven by the maternal instinct to protect the family legacy rather than to confront the wolves on her Board or the investment bankers snapping at her heels. A vulnerable woman lacking in confidence, repeatedly having to try to stand up to aggressive and assertive men in smoke-filled rooms became, for me, an overused cliche throughout the film.

The film explores with some sensitivity the difficulties of Publishers, Editors and Reporters who count politicians among their circle of friends. These are necessary and symbiotic relationships but fraught with potential difficulty. The moral and ethical boundaries can easily become blurred and once one poor judgement is made many others soon follow in its wake. Where the film scores big for me, is in the ending as it sets itself up to almost be the prequel to 1976's All the President's Men which is a very similar film about the Watergate scandal that eventually toppled President Nixon. I wonder what kind of films will be made about President Trump and his legacy in the decades that lie ahead?

This is an important film which should be seen now. Leaders of other nations would do well to heed its message and use it as reminder to check their own use and misuse of media. I wonder if this film will come instantly to mind forty years on in the same way that All The President's Men does today? I doubt it. As a film I'll give it 7/10. As a message to today's White House, I'll give it 11/10!

Posted by Duncan Strathie at 07:19