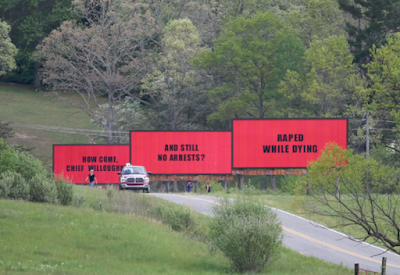 Where do I start with this one? If you need cheering up, do not watch this film! This is a complex but, for me, ultimately sad film. The narrative is pretty thin, this film is driven by the characters. For me the best thing about it is the performance of the cast, I just wish the bleak and sad story that carries the film had been more uplifting. This film is a black comedy - very black in places, but the comedic elements were never enough for me to lift things from the anchoring story line and make me laugh.

The central character is Mildred played by Frances McDormand - one of those performances where  grittiness and guilt-driven burning passion combine to produce a character who is completely believable and convincing. Mildred seemingly isn't one for consultation. She acts rather than discusses and usually acts in a way that provokes others to strong reaction. For me, one of the central features of this film was an exploration of how many of the characters chose when to exercise self-restraint and when they allowed themselves to cave-in to their impulses and lash out in retaliation.

Woody Harrelson's Police Chief Willoughby was possibly the only rational and well-balanced character in the film - and then something happens to challenge that analysis - or does it confirm it? Questions - that what the film has left me with, lots of questions. Other strong performances came from Sam Rockwell and Peter Dinklage.

There are tender moments too. When Mildred is being questioned by Chief Willoughby, a sudden development causes her to remark "Oh baby!" with all the tenderness that only a mother can muster. At one point a young deer appears and for a moment the encounter becomes a thin place and you wait for the epiphany - but it doesn't come. Yet again, the film slaps the viewer in the face and drags them off in an unexpected direction to explore yet more relational dysfunction.

The film takes the viewer on an emotional roller-coaster when signs of hope appear and you want them to blossom, but you are never quite sure which ones will come to fruition. Just when you might have an inkling where the story is going, or even that it's reached a natural conclusion and the credits are about to roll, off it lurches in a new direction to explore new avenues of dysfunctionality. The Direction and acting are both very tight and wholly focussed on exploring the characters and their variety of motivations. McDormand must surely be in line for her second Oscar?

If you want to spend a gentle couple of hours in the cinema allowing a story to wash over you - this is not for you! If you have an aversion to profanities - this is not for you. If on the other hand you wish to engage with acting and film making of the highest order, hold tight and board the roller-coaster. As a story, this film would receive a low score but the power of the characters and the acting propels it to a 8/10. Not for the faint-hearted.

Posted by Duncan Strathie at 07:37