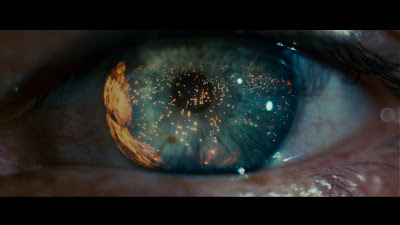 A landmark film in the neo-noir genre, Ridley Scott's Blade Runner has developed an expanding cult following that has made it one of the highest grossing rental/tape/disc/download titles of all time. It is inspired by Philip K Dick's short story Do Androids Dream of Electric Sheep? In 1993, the film was selected for preservation in the United States National Film Registry by the Library of Congress as being "culturally, historically, or aesthetically significant". This is an important and significant piece of cinema - and an engaging and enjoyable one too!

The film is set in a dystopian Los Angeles which when released was 37 years in the future - now only six years away! The visual design and feel of the film have been echoed in so many films since - the rain in The Matrix, the dim grey industrial backlit look in the recent Batman trilogy, the look of Battlestar Gallactica perhaps serve as examples. Its futuristic retro-fitted costumes add to the film's distinctive visualisation. The film has always been shrouded in debate and a degree of controversy.

From it's inception there were disagreements between studio executives and producers, the script went through the hands of numerous writers with endless revisions and a host of top Hollywood actors were considered for the lead role until Harrison Ford ended up as Deckard. In all a total of seven different versions of the film have been released to date with various scenes being added or subtracted and voice-overs removed, all of which continued to fuel the debate over what this film is really all about.

The story centres on a group of the latest elite model of androids - or replicants as the film calls them. Deckard is a specialist who 'decomissions' replicants by the only possible way - killing them. Deckard is a Blade Runner. The central question of the film is 'what constitutes life'. Are the replicants 'alive' in the same way that humans are alive? A central point of debate that has been engineered by script and production ambiguities is whether or not Deckard is a replicant himself. The replicant Roy Batty (Rutger Hauer) aware of a pre-programmed limited lifespan of only four years tells Deckard that he "wants more life". The femme fatale Rachel is desperate to be human and accept her memories as her own and not simply implants.

The film maintains a constant state of paranoia - everyone is always looking over their shoulder. From multi-national corporations to omniscient law enforcement officers, to replicants to Blade Runners - everyone is seemingly threatening whilst being threatened. All is concrete, steel and artificial light - there is no daylight, greenery - nothing natural, the only organic stuff on show is what is dispensed by the fast-food outlets and bars.

This film is clearly a cut above the average sci-fi film exploring interesting questions. It's leap from Dick's story to the screen, its acting, design, music and invitation to metaphysical enquiry all combine to produce something which is much bigger than the sum of its parts. Ridley Scott is currently working on a sequel which will surely be released amid huge media speculation and advertising hype somewhat akin to that which accompanied the release of Prometheus in 2012. I've seen this film several times (in various versions) and it still delights, entrances and engages. I am sure it will only grow in stature as new generations are introduced to all that it has to offer. I am going to give this the coveted mark of 9/10.

Posted by Duncan Strathie at 13:38