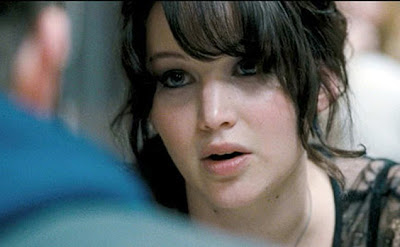 Most films manage to pace the peaks and troughs of emotional engagement throughout the story. This film maintains an almost constantly high level of emotional engagement throughout. It is a film about truth, fidelity, love, loss, denial, regret, forgiveness, self-discovery and above all grace. It cannot fail to evoke an affective response. It is a numinous film as above all it is about our God-given humanity and recognising that, at least for the time being things are screwed up and we have to do our best to get by. This we do by recognising that despite all our "screwed-upness" we still need to live with one another and most importantly, with ourselves.

On the face of it this is a Rom-com about two psychologically damaged people who help heal each other through the medium of dance. But it is so much more than that. If you know anyone who has been afflicted by bi-polar mental illness and the stigma that it brings, your heart will go out to the two main characters Pat (Bradley Cooper) and Tiffany (Jennifer Lawrence). Both deliver excellent performances and are ably supported by Robert De Niro, Jacki Weaver and Chris Tucker - although it is Lawrence who turns in the most gripping performance. A fact acknowledged by her Oscar for the role of Tiffany.

Pat's family is dysfunctional and it is little wonder that he developed the behavioural patterns that led him into being detained in a secure psychiatric institution. His friends and acquaintances are seemingly similar - perhaps the film is trying to show us that everyone is dysfunctional and the line between 'normal' and 'abnormal' is an extremely fine and porous one. The dialogue gives us some interesting therapy scenes and discussions on the effects of the various drugs given to psychiatric patients. But it is the  crystal clarity with which Tiffany sees what she has done and what she needs to do that offers hope to Pat who in turn begins to see her as a 'bird with a broken wing'. This is not so much a film about human beings as human becomings.

The dialogue is sharp and unrestrained - guttural and visceral. The characters connect with the viewer as they trade in a currency of emotional honesty that promotes a believable relationship between the two of them that is fragile, yet with every stumbling step builds itself to become stronger. The soundtrack of the film is cleverly chosen and comprises an eclectic range of songs which help the viewer to make sense of the transactions taking place just in case they were struggling to work it out.

I missed this in the cinema and was happy yo catch on disc. I shall be adding it to my collection and encouraging you to watch it if you've not already done so. It was good seeing Robert De Niro being the freedom to play a real character rather than the characters he is usually given. Cooper will give us more in the future I am sure, but the applause goes to the 22 year-old Lawrence who certainly will go on to collect many more Oscars and accolades - and probably very deservedly so. I'll give this 8/10.

Posted by Duncan Strathie at 15:19