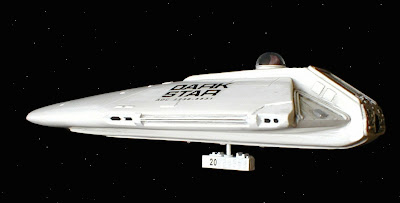 I imagine this 1974 film from John Carpenter will polarise reaction - viewers will either love it or hate it. Carpenter is better known for horror movies than Sci-Fi, but this film started off as a college project and was expanded by inserting extra scenes to stretch it to 83 minutes. It's seemingly minimal budget certainly makes it feel more like Red Dwarf than Avatar but therein lies its charm. Although released as a serious film, it has developed a significant cult following and is probably more widely seen as a dark comedy.

On a mission in deep space, four astronauts together with their frozen dead but communicative commander, are tasked with blowing up unstable planets in distant solar systems. Their space craft's interior resembles an anonymous industrial facility and the control panels look and sound like junk cobbled together from an electronics store stock disposal sale. The computer voice is both futuristic and attractive but dumbs herself down to match the crew's demeanour.

Entertainment is provided by a captured alien (the added scenes) that is a giant beach ball with gloves for feet. The crew chill out by head-banging to 70's surfing music and by playing childish games. The climax of the film involves a malfunctioning Thermostellar bomb having an argument about phenomenology with one of the astronauts who is desperate to stop the bomb from detonating whilst still attached to the ship. It all gets tricky when the bomb tries to be God.

Considering this came out six years after 2001: A Space Odyssey and five years before Alien, it is leagues apart in terms of special effects and expansive sets. As I said, that is what makes it endearing - if you allow yourself to be taken in by its naive charm. This is a quirky but nevertheless important film in both the career of Carpenter and the visual development of Sci-Fi cinema. It probably deserves more than the 6/10 I'm giving it but I shan't to rushing to see it again.

Posted by Duncan Strathie at 20:02