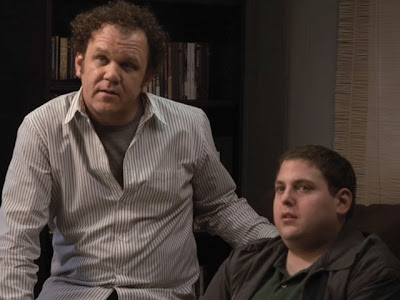 I saw this film this afternoon at a free members' screening at Harbour Lights in Southampton - what a great place. I'm glad it was free.

John C Reilley plays John, a divorcee of 7 years standing who still works with his ex who remains his best friend and confidant. The news of her impending marriage pushes John to new depths of despair. He is persuaded to go to a party and there he meets Molly. There is an immediate spark and the two hit it off. However, after sex each night, as soon as John falls asleep, Molly leaves. John is mystified by this behaviour and one night follows her home. The next day he returns to carry out a reconnaissance and is apprehended by Cyrus, Molly's 21 year-old son. Cyrus is the other man in Molly's life. Molly and Cyrus have a very odd, unhealthy relationship where he is completely dependent on her - another film with an absent father figure.

Cyrus cannot face the threat of John taking Molly away from him and he begins to manipulate Molly and John's relationship. The final straw comes when, at John's ex's wedding celebration, Cyrus confronts John in a toilet and they end up in a fight which spills out on to the patio with all the guests with everyone - including Molly assuming that John started it.

This could only be set in Los Angeles where weird relationships appear to the norm. I won't spoil the outcome for you just in case you feel suicidal and want to go to the cinema. The characterisations are excellent with Reilley looking every part the man who went 10 rounds with Mike Tyson. Cyrus is scary - I hope Jonah Hill was acting - if not, I don't ever want to meet him! Cyrus' mother is played by Marisa Tomei who has a smile that is so warm and engaging that it gives you an instant tan and draws you to her.

If you are looking for a film with a different plot about a dysfunctional family, this is for you. Those who are psychologically informed will enjoy watching this and analysing who did what to whom and why. It would also be good to know if there is any long-term hope for Cyrus.

A Romcom for a quiet Sunday afternoon. See it if it it's raining outside.