The Devil and Daniel Webster 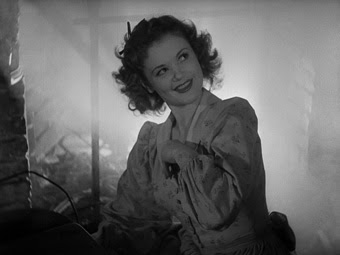 This film has all the subtlety of an atomic bomb! The story is quite simple - when you fall on hard times enter into a contract with the Devil and for seven years you will have good luck and more money than you need. When the seven years are up you die and the Devil gets your soul.

Set in the 1840's and made in the 1941, the plot is as simple as set out above but it plays out across a series of issues that are raw in the pre-Pearl Harbour American psyche. On the back of the Great Depression with the USA choosing isolation over participation and with a world at war, the need to define American identity in a way that underlines freedom, entrepreneurship and the pioneer spirit conspire to produce a movie of sickly sweetness. The directness of the message cannot be missed by anyone - neither the morality tale nor the 'let's reinvent out nation' tale. Along the way the film attempts to exorcise the demons of slavery and Native American abuse whilst building up patriotism and depicting the Devil in the most genial and human terms as Mr Scratch endearingly played by Walter Houston. Oh, and the ever-present sexual temptation of the French Belle featured in the picture above.

The notion that a human has a soul is a given in the film. To whom does it belong is the question the film poses - with a complete lack of eloquence and sophistication. The notion that it can be sold for short term gain is as old as folk tale culture itself. For what it might be exchanged is of course the interesting question. Is it ours to give, is a worthy question to consider too. If we can choose to give our heart to Christ, can we as easily choose to give our heart to someone different?

When we are down on our luck, out of resources and in hock up to our necks, what will desperation force us to do? The film concludes with the Devil going through his book of contacts - people with whom he has a contract. In the end, the Devil stares into the camera and points at the audience in an unsubtle suggestion that you could be next. Scary stuff.

I guess this was brave cinema for 1941. I wonder what it would have looked like if Hitchcock had directed it, or Quentin Tarantino? Even scarier stuff! As this is an American film it has a happy ending - so it's safe to watch as the good guys prevail - thanks to Daniel Webster.

Worth the watch but it only scores 6/10.

PS It only struck me having slept on it, that there is absolutely no spiritual/theological content to this film and certainly none in Daniel Webster's defence of the accused. I imagine therefore that this is an indictment of America's shift towards liberal humanism evidenced by literature/cinema in the 1930/40's. Again, an interesting point to ponder given the world stage that was unfolding.
Posted by Duncan Strathie at 22:30

Probably nothing to do with the movie, but it's interesting that you equate 'soul' with 'heart'.