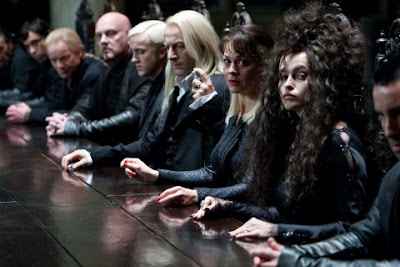 Harry Potter has come of age. The conceptualisation, the acting, the story all take the saga to another level. Well done Joanne Rowling for the story and also to David Yates for his Direction of the film. This film stands on its own two feet and does not need the juggernaut of Pottermania to sustain it. I see it took $61m on its opening day in the USA!

This film runs out at 146 minutes - not bad for part 1 of a book! The story never lags and the dramatic tension rises and falls to deliver a roller coaster ride of emotional highs and lows. I was looking for weaknesses in the acting performances and found none. I was expecting melancholy and melodrama - but his film is more like The Wizard of Oz meets Jason Bourne. It is mature and stands independently of any back story. Hogwarts is but a memory as the story unfolds out in the big and increasingly bad world. It's a good old tale of good verses evil and part 2 will, I hope, deliver a saviour figure and the defeat of the Dark Lord. I wonder if Voldemort is a Sith?

I'm not going to spoil the plot line for anyone (like me) who hasn't read the books and comes to the film fresh. I will comment on a few changes in emphasis that JK has skilfully moved the plot to focus on.

There are plenty of special effects, spells and enchantments all of which reinforce the feeling that this continues to be a story about witches and wizards. The major change is that all the action takes place outside Hogwarts which underlines the notion that this cohort of students have graduated and are ready to take their place in the real world.

It is not only the theme of impending darkness that Voldemort and the House of Slytherin seek to usher in that marks a move to more mature and deeper themes. The three main protagonists are also shown as more mature and complex characters. Not only do they have to contend with the threat of the end of the world as they know it, but hormone soup is flowing through their veins and Ron in particular has a complete inability to express himself coherently when matters of the heart well up inside him which not only frustrates him but the viewer too. As much as anything, this film is to do with relationships that matter - and not only romantic ones as Hermione's painful parting from her parents within the opening two minutes shows.

There is so much to commend this film. I could go on and on - but rather than that, go and see the film for yourself.

Email ThisBlogThis!Share to TwitterShare to FacebookShare to Pinterest
Labels: theology