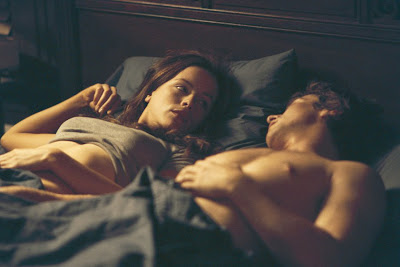 Another film set in Los Angeles depicting a dysfunctional family with an absent father figure! Oh happy day. The other half of today's members' free screening at Harbour Lights. This one is from 2002 and no doubt was chosen to sit alongside Cyrus.

Sam (Christian Bale) and Alex (Kate Beckinsale) are bright PYT's at Harvard. They jet off to LA where Sam is to undertake a residency as a Psychiatrist whilst Kate completes her Ph.D. dissertation on genomes of Fruit Flies. Gripping stuff. The plan is for them to stay at Sam's mum's place - she should be away. When they arrive, they find that she is in residence with a British rock group - she is a record producer of some repute and the house is equipped with its own studio.

The basic story is that Sam is tempted by Sarah a second year intern from Israel but worried for Alex's peace and quiet as she studies. Sam encourages Alex to find a place for them to live - near where Sarah lives. Meanwhile, Alex is gradually drawn to the drugs and sex and rock n' roll lifestyle of the house's other occupants and begins to discover a side she never knew she had.

Sam fights off the demons of his attraction to Sarah only to confront Alex in a state of undress at a party in the penthouse of a local hotel with British rock group's lead singer who is having a fling with Sam's mother. This is just at the point when Sam's mother calls a halt to a menage-a-trois but that doesn't stop Sam from jumping to conclusions and having a go at the Brit. A big punch up involving all four main characters follows which spills into the foyer of the up-market hotel. Miraculously all comes good, Sam and his mother are reconciled and the film concludes with Sam ending a call with Sarah saying he would call her right back. Inconclusive.

The only glimpse of something real and tangible is when Sam breaks professional protocol and calls in the mother of a 16 year-old patient he is treating in an attempt to offer some basic relationship support in the hope of heading off a full-scale spiral into drugs and psychotic behaviour. The rest of film deals with passions and desires that never quite as real or believable.

I felt the story was self-indulgent and never really got away from predictability and pretentiousness. Christian Bale turned in his hallmark half-whispered performance and lacked any real spark of life or conviction. A moribund performance in a moribund film. It left me feeling very frustrated. The way in which temptation was offered and faced, made sense only if Harvard and New England were devoid of temptations and a move to the state of Californication opened up endless possibilities. That Sam and Alex had progressed to the age they had and lacked the vocabulary, wit and motivation to articulate their feelings towards one another only serves to demonstrate that even PYT's don't know which side of their bread is buttered! The stereotypical portrayal of Sam's mother as the archetypal rock groupie chic and the Brit rock band as philandering pot-heads probably satisfied American box offices, but on a chilly November Sunday afternoon in Southampton UK, it left me as cold as the East wind.

I'm ever more glad that this screening was free. Don't bother going to see it - there are much better stories and performances out there.

Umm..I am American and hated it just as much as you, TT hank you very much!

Kelly - thanks, always happy to have my stereo-typing challenged. But it is a poor film.

When a story in search of meaning is so embedded within a culture, it is almost inevitable that the story and the culture will, by implication, attract similar ratings.

It always intrigues me when an older review reiggers a response. The website stats say 2 people have looked at this in the last day - I wonder what prompts people. Perhaps they catch it on TV or a friend watches the DVD. Classics I can understand but the more routine and poorer films still have a life of thier own! Just shows other views are available - whihc is good news really.

Just saw the movie on tv. I wish I can get that time in my life back. I'm a nice critic but this movie was horrible is an understatement.

With you all way dude!

Thought the acting was superb. I just want to know what the ending meant!

Wow, what a pompous reviewer.

bought it hook line and you know what... it seduced me possibly because i am a huge Bale fan... that said the first reviewer was right... Chris and Kate ovviously did. not live in an east coast vacuum...certainly didnt need to wait for california to act out adolescent attractions which they could have exorcized elsewhere and earlier in their marriage bound relationship... case of pre marriage cold feet? obviously... a case of last chance heebie jeebies? maybe..... definitely a coming of arrested age story about 4 people who should have been beyond all of this years ago... ... i loved the movie on a visceral level but the character issues.seemed weightless and without point... possibly Bale's character should have spent more time unthawing his fiance with a hot hair dryer....that tree needed a hug... liberal pun intended.. ...

I have a totally different viewpoint on the move. I believe you were watching two people that have lived a predominately structured life, from the opening sex scene to finding out both were doctors who worked very hard to get where they were and continue to be encompassed by there goals. Than to be thrown into a totally different life style and situations that were new to both of them. This happens to all of us in one way or another with out us ever realizing it and yet I have read a number of reviews where this was not realized by the viewer. We were left to make a conclusion at the end of the movie as if we were part of the ending. What would yo have done?

I need to watch this film again.

when I first saw it I was unaware of the role of Laurel Canyon in the developing music/cultural scene of the time and the creative and unstructured way of being that folk in the neighbourhood were engaging in.

Ok, not perfect, but I kinda loved the messiness and the vacuousness and the disjointed-ness mixed with the realer meatier moments. We’re not all perfect, grounded, self-aware, fully-embodied beings. Kinda like the movie. Sure, maybe that wasn’t intentional but I enjoyed it anyway. It had the weird spaciousness of some earlier 70s movies. I loved the intimacy of the reconciliation of son and mom aknowledged by their fingers and toes hug at the pool. I loved the boat going by towing the boyfriend and the moms shrug and smile. Life is fucked up and ludicrous sometimes and sometimes when we think things are resolved there’s something else to mess it up. Sometimes we have it all sewn up and sometimes it’s ripped apart with no immediate neat repair available. There is no ending.